Would you like to switch to the accessible version of this site?

Don't need the accessible version of this site?

Please take a moment to meet our wonderful staff at Bay Animal Hospital who are eagerly waiting to provide your beloved pets the top-notch veterinary care they deserve! 🐾

We are proud to say that our entire staff takes part in frequent continuing education, as we are always striving to sharpen our skills and expand our knowledge to better serve you and your pets.

Our team believes in cross-training our staff members so that we all have the capabilities to best assist you and your furry companions, whether we're making you an appointment for a routine exam, you have an emergency situation, or even just to offer tips for everyday care.

We hope that you enjoy being apart of the Bay Animal Hospital family as much as we do!

Pete started at Bay Animal in January of 2020, after previously working at Animal Services & Adoption Center (formerly Animal Control) for a couple years. When a wellness visit to the shelter turned into an unintentional scouting trip for the most purrfect feline, Pete was ours.

When he's not sleeping on the job, he's usually sitting somewhere he's not supposed to be; you can usually find him on the fax machine or on a stack of client files.

Though strict at times, Peter has made a wonderful addition to the Bay Animal family  & he knows he's found his furever home with us. 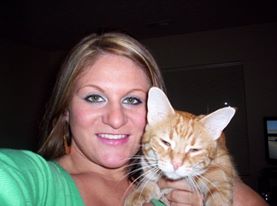 Lindsay joined the Bay Animal team in 2013. She graduated from Saginaw Valley State University in 2007 with her Bachelor's degree in Business.

In the past, Lindsay has volunteered at & served on the board of the Bay County Humane Society. Working with animals has always been her passion & dream job. 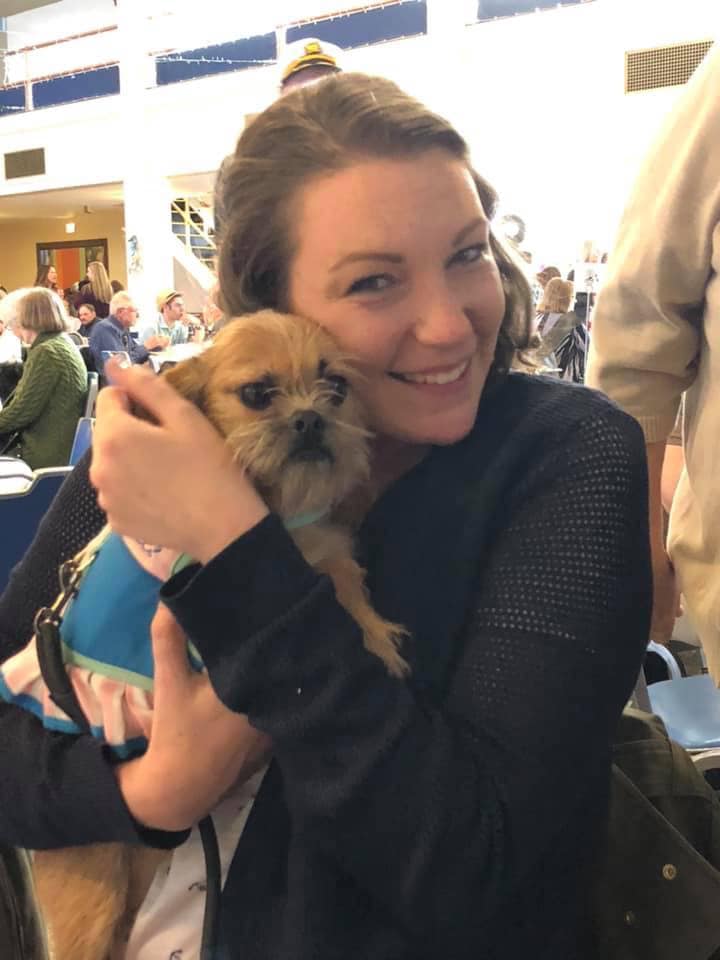 Jessica joined our team in 2011 as a Veterinary Assistant after working at the Saginaw Zoo. In 2015 she took on the role of Assistant Practice Manager and now enjoys doing administrative tasks behind the scenes.

Jessica still loves to get out from behind the desk and assist in surgery and exam rooms as much as possible.

She also loves spending time with her husband Kyle, their fur-babies Zoey and Phoebe. 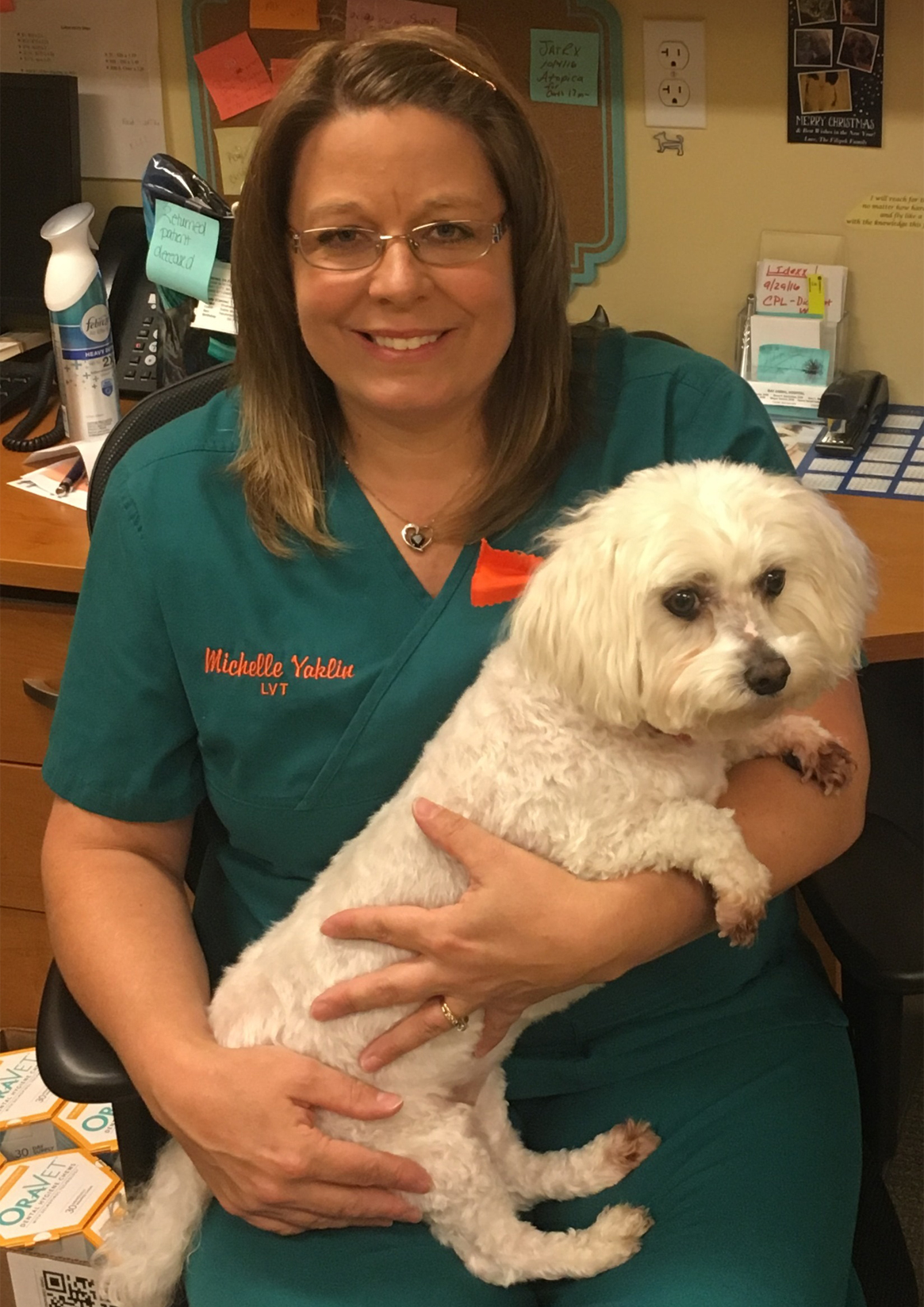 Michelle began her career at Bay Animal Hospital in 1998 as a Veterinary Assistant. In 2003, she graduated from Baker College of Flint with an Associates degree in Veterinary Technology. In 2015, she became the purchasing department lead, & in 2019 she became an Assistant Practice Manager. 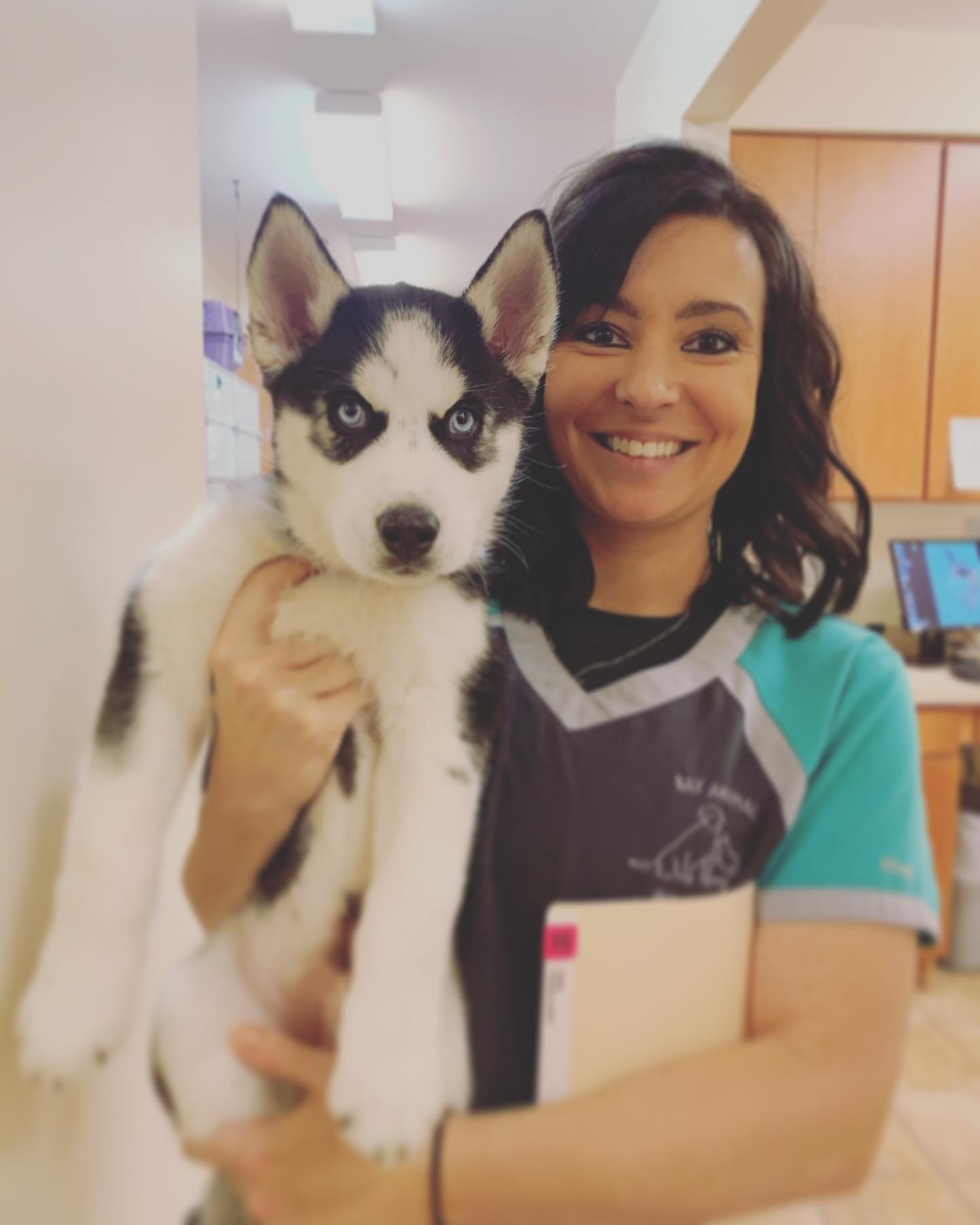 Tiffany is a Michigan State University graduate of the Bachelor Veterinary Technology program & has been practicing as a Licensed Veterinary Technologist here since 2009. In the past, she has worked at the MSU Teaching Hospital in the emergency & critical care department.

Her passion in veterinary medicine lies within the field of emergency & critical care medicine, as well as ultrasonography. 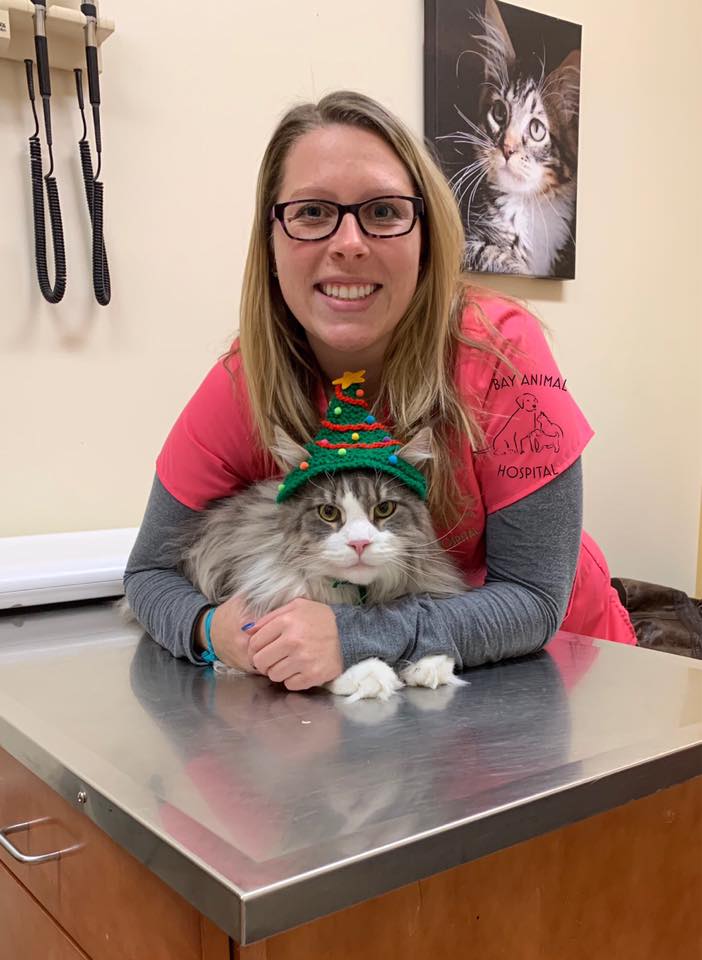 Jessica has a strong passion for ultrasound & anesthesia, & enjoys fishing, snowmobiling & being outdoors with her husband, D.J. in her spare time. 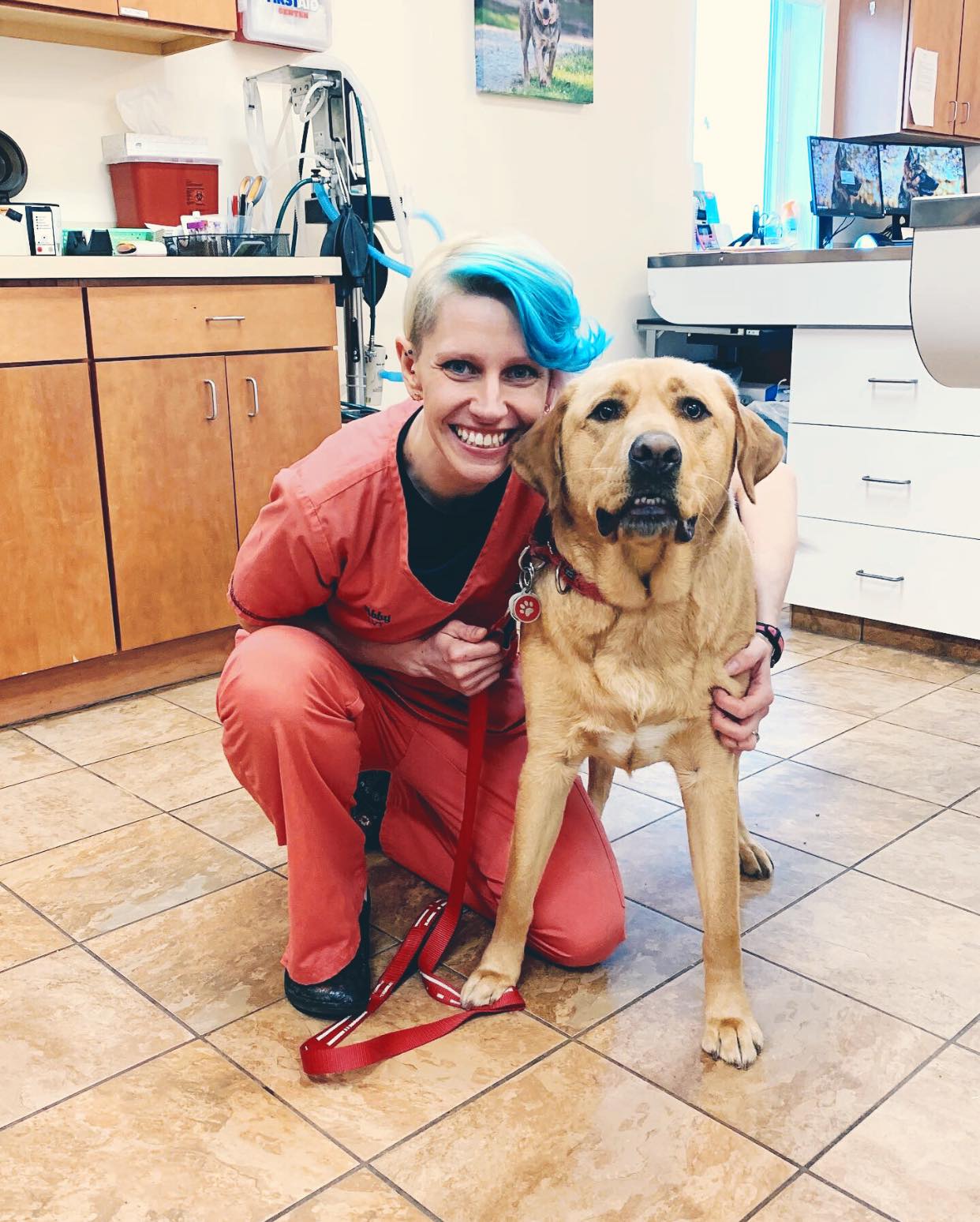 Abby is a member of the Society of Veterinary Behavior Technicians & the Association of Professional Dog Trainers. She volunteered for a summer at Binder Park Zoo while she was in tech school, where she gained a passion in wildlife & exotic animals. 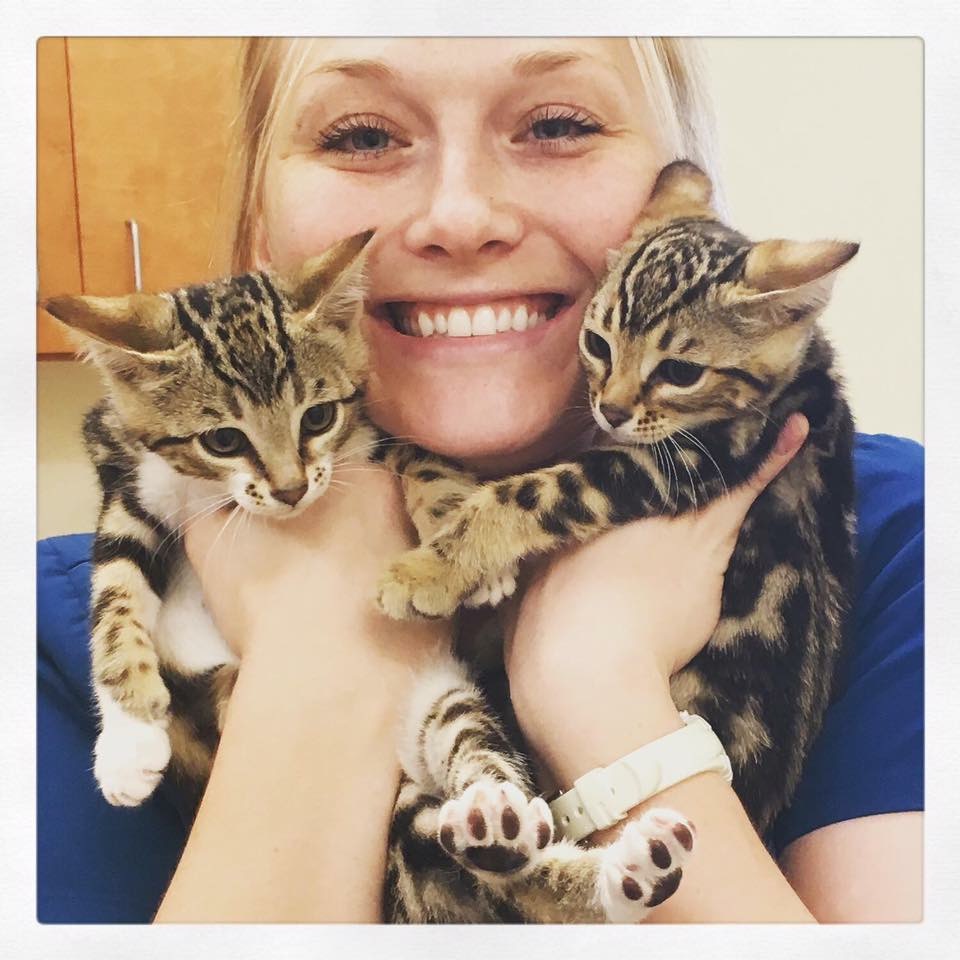 In her free time she enjoys spending time with her husband Andy & their fur-babies.

Her passion in veterinary medicine is adoption & rescue, & she also enjoys gardening, reading & crafting. Check-out her facebook page, "Handmade By Hannah" to see her latest creations available for purchase! 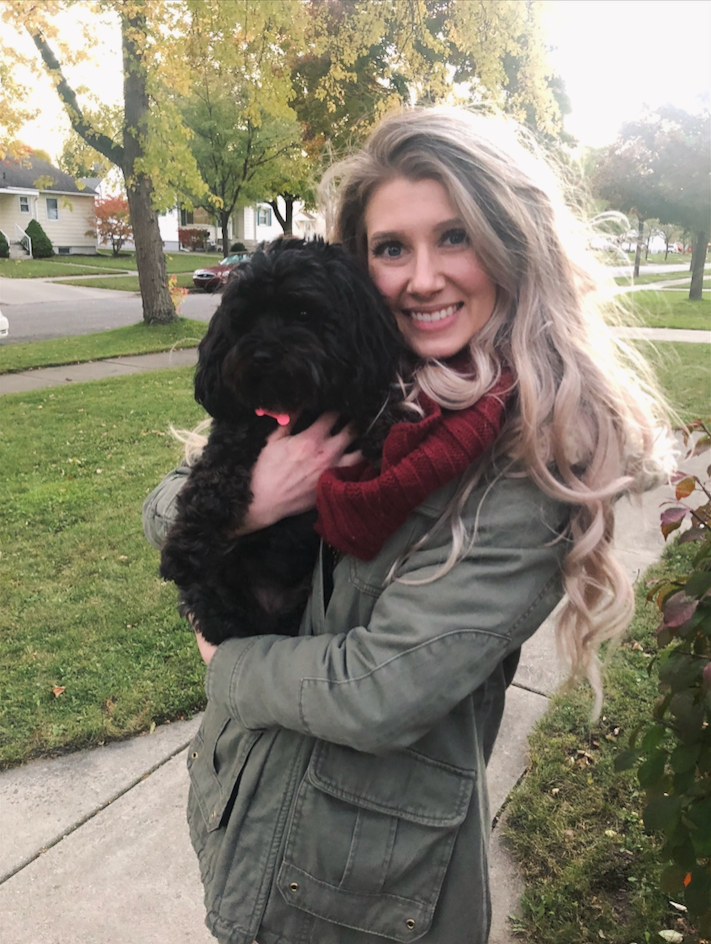 Jenna joined our team in 2014 as a kennel attendant & in 2018, she graduated from Michigan State University with a Bachelor of Science in Veterinary Technology & this year became the supervisor of our boarding facility.

During her free time she enjoys spending time outdoors, fitness, & being with her family & friends.

Jenna has a dog of her own at home named Max. 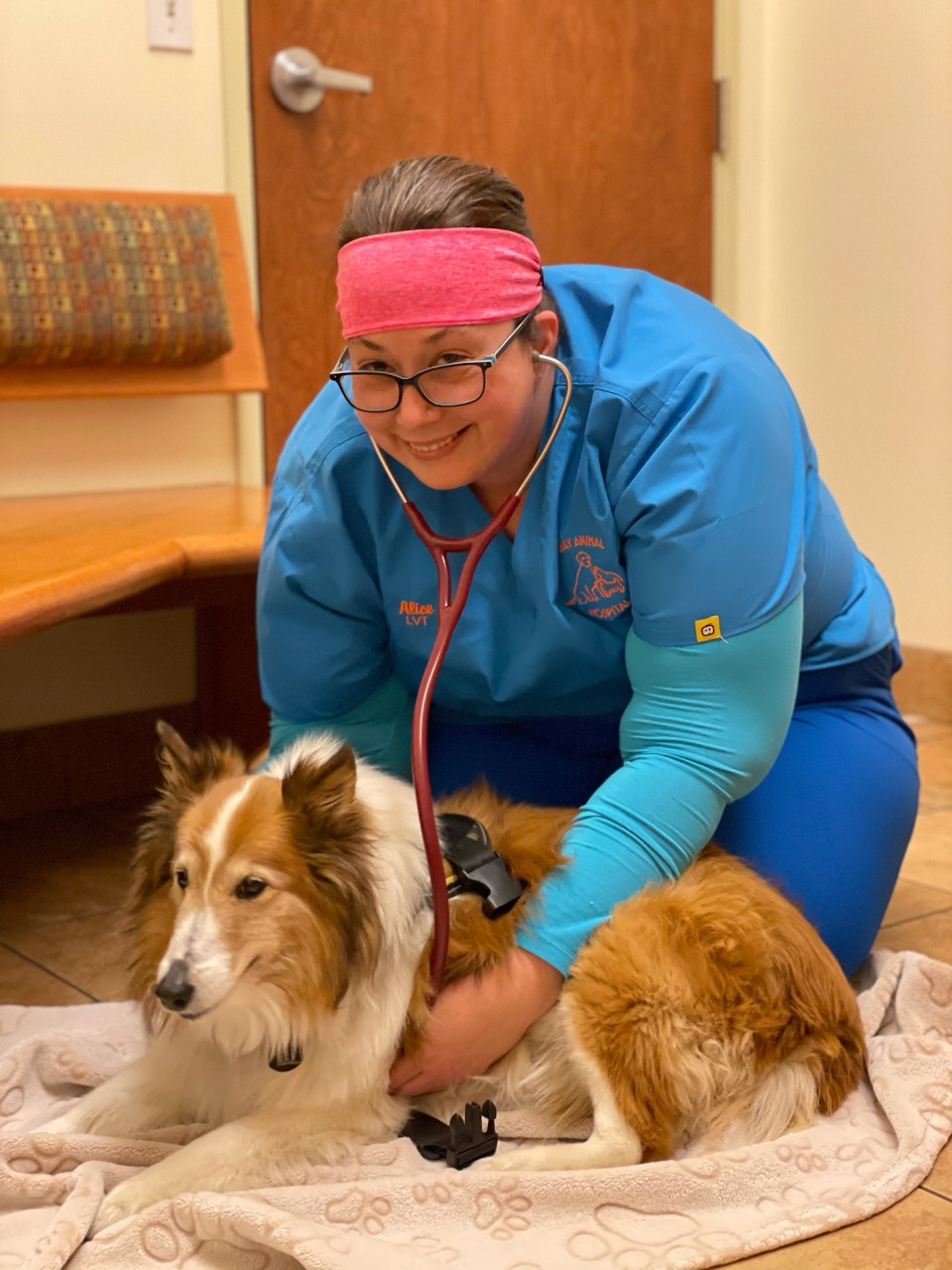 She has been in the vet med industry for six years, & officially became a veterinary nurse two years ago. Alice's true passion is being able to share her knowledge with pet owners who come to us with a sick baby. She enjoys helping them understand that in most cases there are medications, diets, and other various treatment paths we can take to help their pets live healthier lives.

At home, Alice has two dogs,  Caroline & Desiree, & four cats, Scout, Miss pretty, Jamie Lee, & Sarge. In her spare time, her hobbies include counted cross-stitch & reading. Snuggles from her patients get her through stressful days! 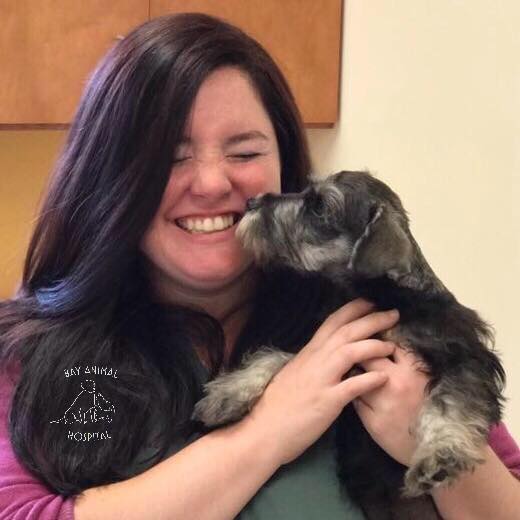 Laura graduated from Michigan State University in 2013 with a Bachelor's degree in Animal Science. She joined the Bay Animal family in 2014 as a veterinary assistant & often assists in surgery and as a client service representative. In her spare time she enjoys showing horses.

Laura takes pride in assisting in extensive medical cases, partnering with team members in finding the most effective treatments or procedures to help a pet feel better again.

She has a Corgi named Delilah & a horse named Reba whom she spends much of her time with. 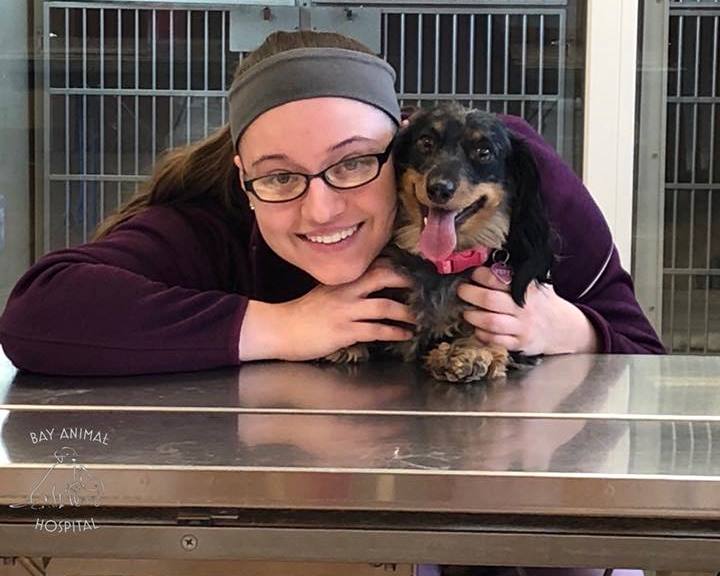 Hannah joined our team in the fall of 2016. She attended Lake Superior State University for two years while studying fisheries & wildlife management. Because of her love for animals, she decided to pursue a career in the veterinary field.

Hannah plans on continuing her education to become an LVT in the future.

In her free time she enjoys reading, horseback riding & playing with her cats Caesar & Calypso. She also has a horse named Ember & a bunny named Fern. 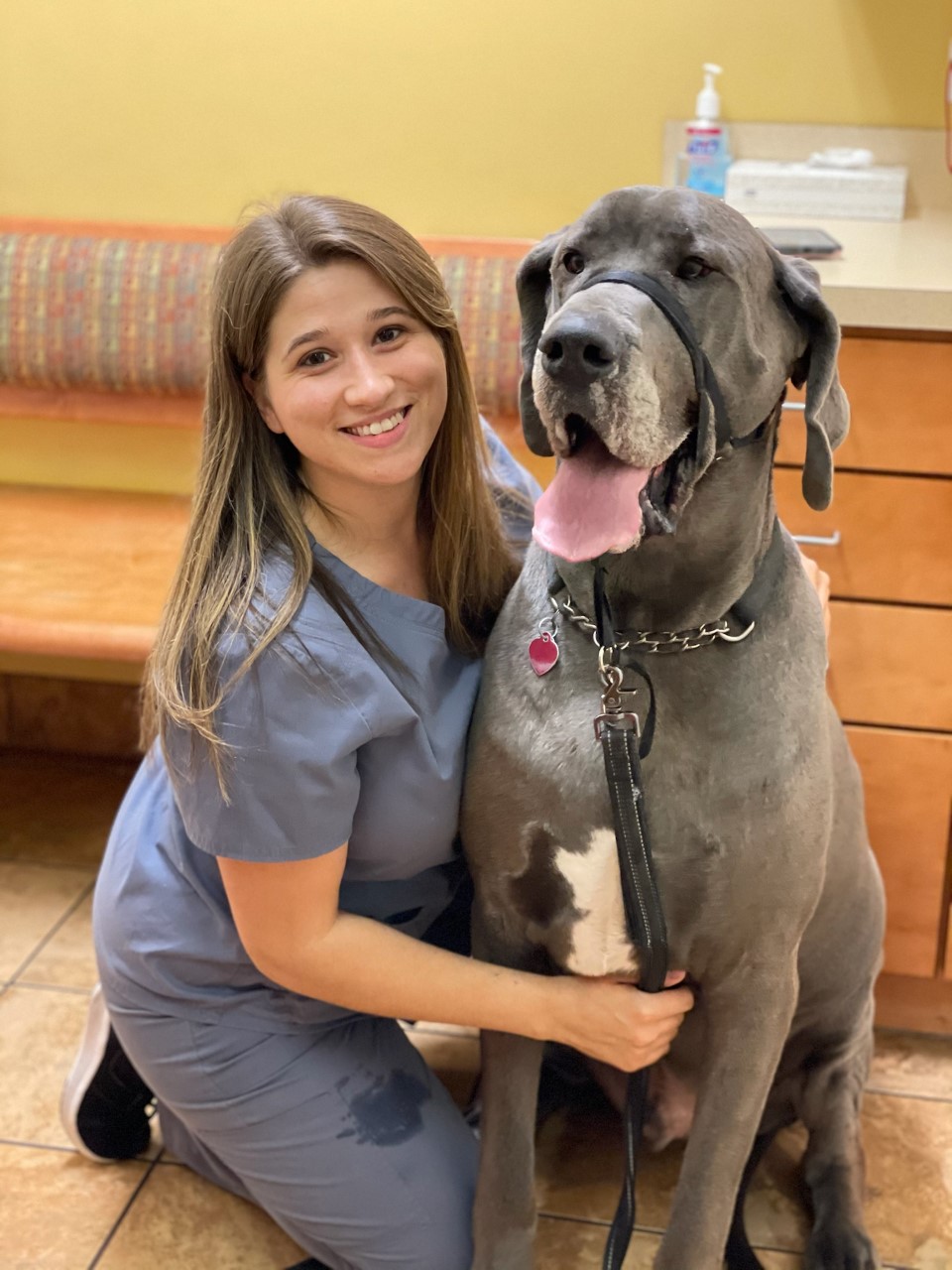 Chelby has 7 years total of veterinary experience & started here with us in 2020. Her favorite part about veterinary medicine is learning something new all the time. Her end-goal is to become an LVT.

she spends time with her boyfriend & their two daughters.

When Chelby's not at work & wants to relax, you can find her outdoors, especially in her kayak, or in the kitchen making something yummy! 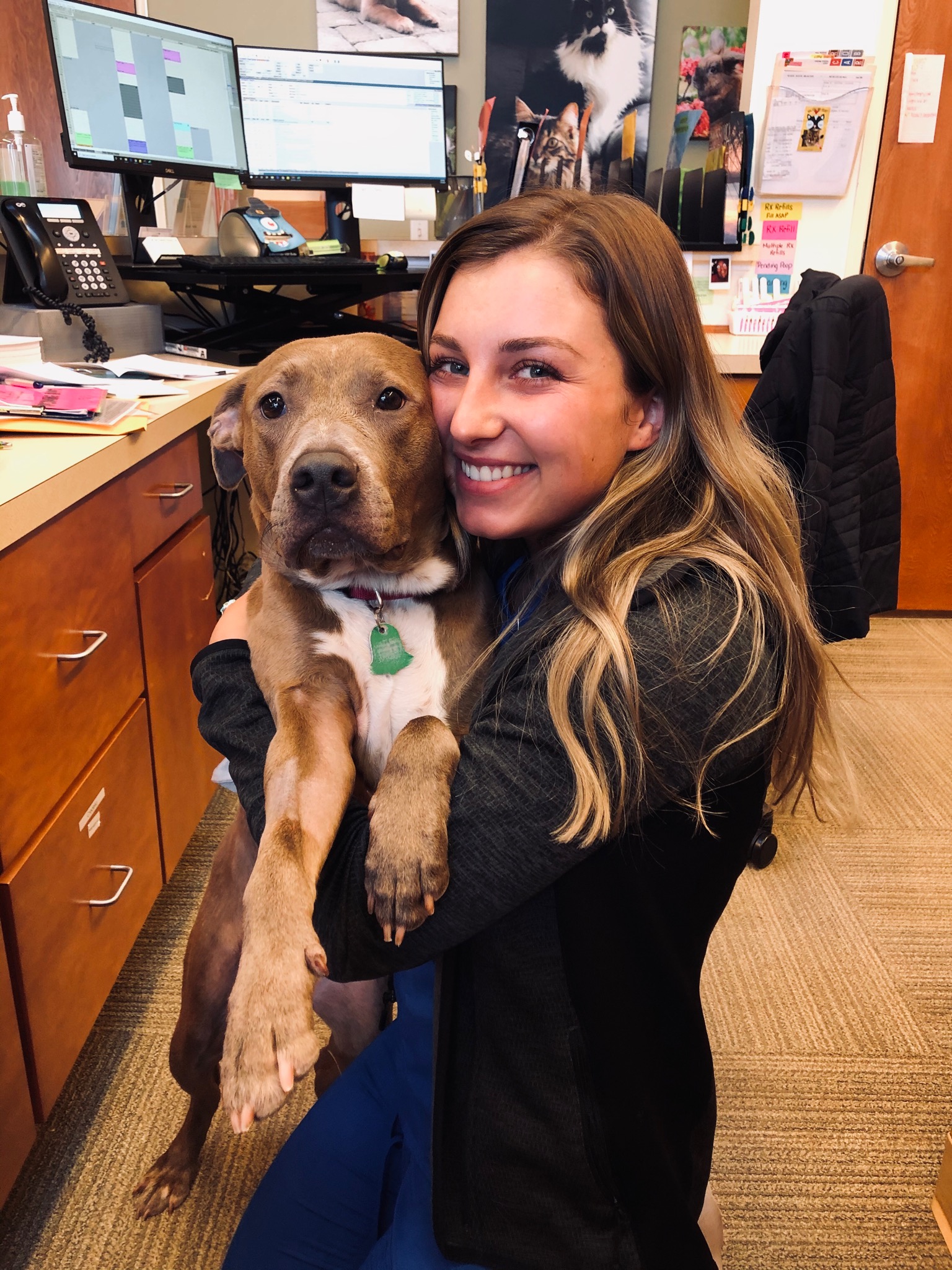 Katie has been with us since 2014 where she began her career in our boarding facility. In 2017, she joined the front desk team & became a Client Service Coordinator.

In 2020, she established a new position here at BAH as our marketing coordinator, & now spends her time focusing on our social media platforms.

Katie's favorite part about her job is snapping pictures of team members hard at work, doing what they love & of course seeing all the adorable pets that come to see us.

When she's not working, she enjoys spending time with her boyfriend, Konnor. She has two cats, Garfield & Milton, & a rescue Aussie named Finley that are her world. 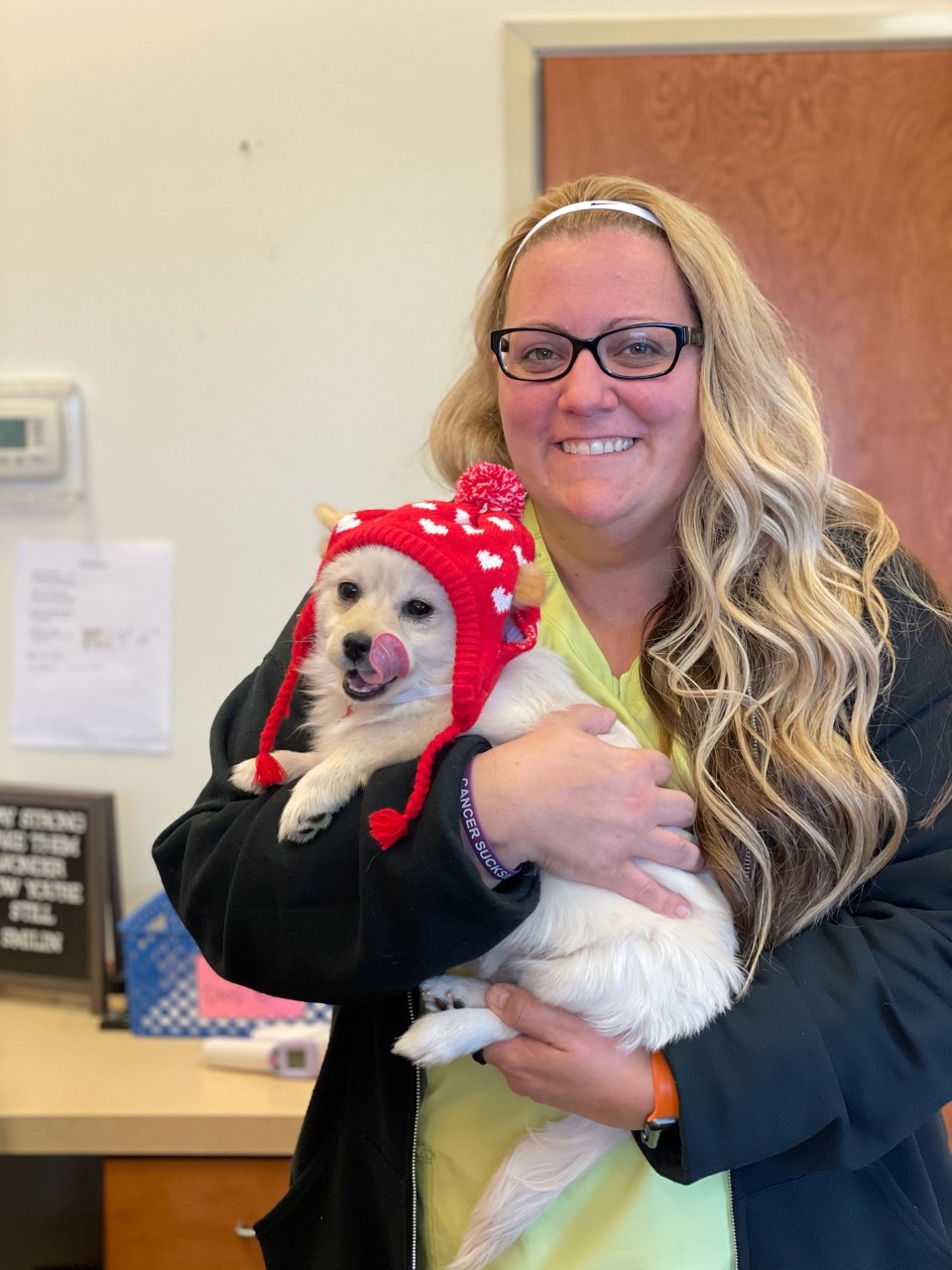 Lisa joined us in 2016 as a client service representative at our front desk & this has become her niche. In 2018, she became a team lead & head of the CSR's. Lisa has over 15 years of experience in client service!

She says the best part of working at Bay Animal is being able to take a call from a client with a sick pet & getting them seen by a doctor immediately to help their beloved family member.

When Lisa is not working, she enjoys spending time with her family. Her passion is cars & listening to good jams. She has two dogs, Cooper & Baylee, & a kitty named Pesky. 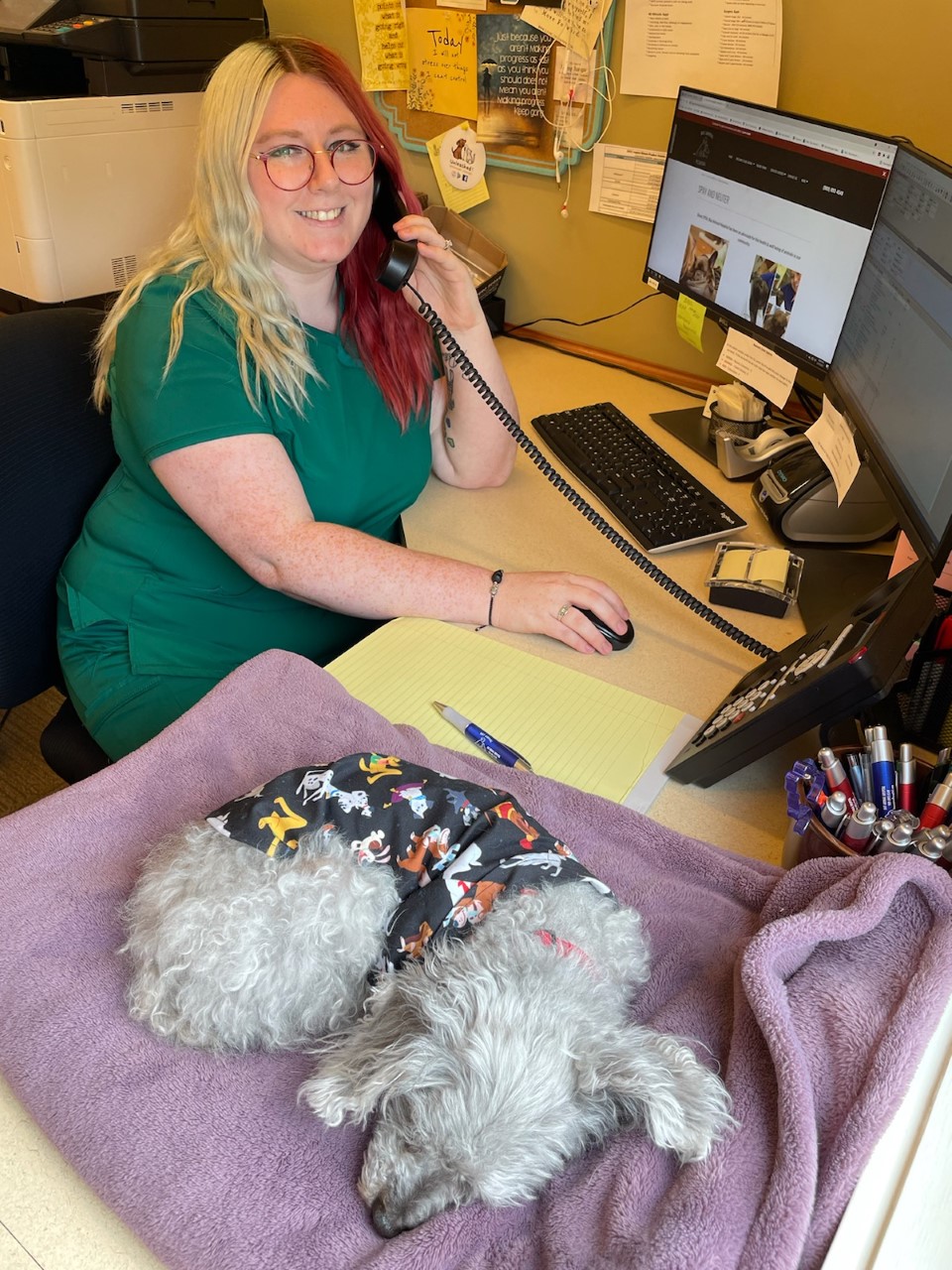 Anna started at Bay Animal in 2016 as a boarding attendant & in 2019 she joined the front desk team as a CSR.

When she's not taking exceptional care of our clients, she's our resident artist & probably drawing or painting something amazing for us!  Anna graduated from Saginaw Valley State University in 2019 with her degree in fine arts.

Anna is proud to work with a team that is always doing their best to be an advocate for all animals & this is why she loves BAH.

In her free time, she's relaxing with her husband Cody, playing board games, & snuggling with their five cats-- Chico, Robin, Cider, Odin, & Pumpkin. (She also probably has a foster feline at her house as you read this, haha!)